Thanks to Peggy Edgington for sending this Today. 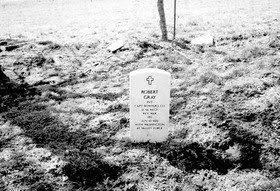 From the Danville Advocate Messenger:
Monday April 6, 2009
Looking Back: Markers of time -- Discovery of graveyard leads to lesson in history
By BRENDA S. EDWARDS Contributing Writer
The grave of Private Robert Gray, a Revolutionary War veteran, who served with George Washington at Valley Forge, went unnoticed for many years after he was laid to rest in a small family graveyard off Ky. 1856 between Perryville and Mitchellsburg.
He was buried in the family plot after his death in 1825 but no marker was visible at the site. If there was ever a stone at the grave, it had been destroyed or buried.
However, after many hours of research and hard work, Private Gray now has a white military marker near his grave. It was erected in 2008.
Joann Wilkerson, who grew up on Sugar Bush Farm, never knew the cemetery was on the adjoining farm until 1970 after a windstorm damaged a large clump of trees and the crumbled tombstones were exposed.
She and her mother, the late Lucille Bruce, checked the graveyard and learned most of the marked graves were from the Gray family. The last person buried there was Jane Gray, who died in 1861.
The land where the graveyard is located was purchased by Mrs. Bruce and added to Sugar Bush Farm, now owned by Joann and her husband, Conley Wilkerson.
After checking with many Gray families in the area, who were not aware of the cemetery and did not know anything about Robert Gray, the search was put aside until 2005, when a descendant, Dennis Gray of Indiana, stopped by the farm to check out the cemetery.
The Wilkersons did research on Robert Gray and learned of his service in the Revolutionary War. He served three years in the Virginia Continental Line and lived for about a year aboard a British prison ship off Charleston, S.C.
Records show Gray served in the 4th, 8th and 12th Virginia Continental Line Regiments, which apparently went through several reformations to adjust to the loss of men through military action, illness and desertions.
Gray is not listed on a marker with other Revolutionary War veterans on the lawn of the Boyle County Courthouse, but research shows that he was a veteran who came to Kentucky after the war. He apparently lived out his life in the Perryville area.
Military records show Gray was a private in the 12th Virginia Regiment and enlisted Aug. 30, 1777, for a three-year term. He was with the unit when it marched from Lancaster, Pa. The payroll in January 1778, shows he was paid in shillings. Two months later, his muster roll is dated, Valley Forge, March 1778.
Records cover Gray's service from his enlistment on Aug. 30, 1777, through 1779.
Gray came to Kentucky with other families
Robert married Sarah Pearce on Jan. 11, 1786, in Prince Edward County, Va., and they most likely came through the Cumberland Gap to Kentucky. His brother, John and wife, Lucinda, may have been among a group that settled near the Chaplin River in Mercer County (now Boyle).
Sarah's name appears on legal documents, but is referred to only as Robert's wife and his children's mother.
A copy of a Mercer County deed dated March 24, 1795, shows that William McBrayer conveyed to Robert Gray 250 acres on the Chaplin Fork of Salt River, being a part of McBrayer's pre-emption of 1,000 acres. The cost was 75 pounds. The Gray family cemetery is on a portion of that land.
Gray's will states he wanted to be buried beside his wife, and shows that he left his estate to be divided equally between his three sons, John, Charles and Robert Jr.
Robert Jr. was to inherit the homestead where he, his father and two sisters lived and much of the tools, livestock and farm supplies. His daughter, Elizabeth, inherited linens and part of the money from the sale of the stock.
Daughters, Jane and Sally, got two cows, 12 sheep, furniture and money. Charles and Robert were to pay Jane and Sally $20 annually as long as they remained single. Robert Sr.'s personal property amounted to about $300.
The will mentioned the two acres that were to be laid off for a family burial ground. John and Robert Jr. were appointed executors of the estate.
Robert Jr. and his sister, Jane, who never married, lived on the farm until their deaths. Robert Jr. was born Oct. 28, 1795, and died May 11, 1845.
Robert Jr.'s will also mentioned the cemetery and instructed Jane to erect tombstones on his grave as well as his parents, Robert and Sarah.
After Jane's death in 1861, her will, dated Sept. 14, 1858, said: "Purchase four tombstones of marble, one for my mother and father, one for my brother Robert and one for myself." She also asked that other brothers and sisters and a nephew, John Gray, be buried at the cemetery, and that the cemetery be enclosed with a stone wall with iron railing on the top of the wall. She also left money with the interest to be used to educate four children of parents unable to school them.
There is little evidence that tombstones were put on the other family graves, but Jane's grave is marked with a tall monument. The partial stones found with names are of Nancy Burton, who may have been the wife of John Burton; and John, probably a nephew of Jane.
Jane was the last surviving descendant of Robert Gray Sr. to live on the Gray farm.
After discovering the Gray graveyard, the Wilkersons have cleared off the site, planted some flowering bushes and plan to replace the fence.
Conley and Joann Wilkerson are not related to the Gray family, and have found it interesting on the amount of information they have accumulated about the pioneer Kentucky family.
"We've had a lot of fun looking around," said Conley. "It's amazing what you can dig up."
Copyright:The Advocate-Messenger 2009
Posted by Bob Pipes at 8:05 PM

The Robert earl Gray from Ohio that fought underwashington in our family is buried near Meta Mora Indiana. I have all the pictures and history on him as well. He came to indiana one winter of 1823 and bied on the 23rd just before Christmas in the old family cabin near the lady Jane Gray bird sanctuary, Our Gray's still live there as well as in Kansas. My Great Gradfather
Robert Earl Gray the 5th, was the first Doctor in Western Kansas, Near Dodge City and also hd anj office in Garden City. He came from Indiana in 1880 and settle in Garden City where My family is from. If you like you can contact me at spg357@gmail.com or Face book scottgray357 wichita ks