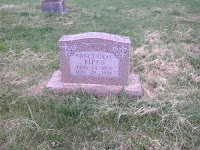 At last we have a picture of the grave stone of Nancy Gray Pipes. Nancy was the youngest daughter of John Gray and Lucinda Jones. John Gray I believe was a Revolutionary War Soldier and came to Mercer Co. very early from Prince Edward Co., Virginia. His daughter Nancy married William Pipes, who is buried in Old Union and was the youngest son of John Pipes Jr.

William died in 1855 at age 52 and after that many of William and Nancy's 12 children (born between 1822 and 1851) migrated to Pike Co., Indiana. I think the only child who remained in Boyle Co. was George Washington Pipes (GW is also in Old Union with his wife Mariah Edwards) Their son Bradford, who was a member of Morgan's Raiders, was murdered in 1865 shortly after returning from the war, is also buried in Old Union.

Nancy Gray Pipes and William owned the property just east of the cemetery and may have had a home where the house now stands that belonged to George Washington. That house is now owned by the Shepersons. Nancy sold a piece of the property to the L & N railroad and I have a copy of the deed here in my files. George Washington raised his family there and I have pictures of them as well.

Nancy moved to Pike Co., Indiana when her age caused her to be more dependent and probably to be closer to her daughters. She died there in 1886 and is buried in Flat Creek Cemetery.
I am not sure who did it, but her stone is obviously not the original and has been replaced. She has many, many descendants from those twelve children.
UPDATE 08/04/09 It was Janavie Pipes Richardson, a daughter of Nathan Pipes who raised the funds for the new stone.
Many Thanks to Marcia Curtis and her daughter Karen Fulk for the picture. They are taking several more pictures of the Pipes stones in that area for my web site.
Posted by Bob Pipes at 3:40 PM