John Bradford Harmon (3 of them) 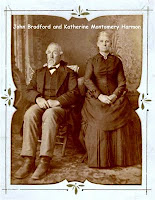 Did you know there were 3 men in the Pipes - Harmon family whose name was John Bradford Harmon? To understand who they were you have to go back to the original Pipes - Harmon families in what was then Mercer, now Boyle, county.
John Pipes Jr. and Michael Harmon were the first of our families to settle in Kentucky in the mid 1790s. John Pipes came here from Surry County, North Carolina and Michael Harmon came here from Pennsylvania. They had 18 children between them and 7 of those children married.
Why and how could it be 7 you ask? Well, two of the pipes daughters ( Jane and Elizabeth) married someone, then became widows and then married a Harmon.

Peter Harmon (Michael's oldest son) married two of the Pipes daughters. First Abigail and then as a widower he married Abigail's sister, widow Jane (who had been married to Archie Gray).

So where do the 3 John Bradford Harmons come from?

In 1822 the first John Bradford is born to Peter Harmon and Abigail Pipes. He married Catherine Montgomery and spent his life in Kentucky and is buried in Old Union. Her name is sometimes given as Katherine. Credit to Peggy Edgington and Rita Satterly for the picture.

In 1825 the second John Bradford is born to Jacob Harmon and Elizabeth Pipes. He was born in Kentucky but in his young life he migrated to Missouri and became an ordained Methodist Minister and married Elizabeth Knifong. he died and is buried in Missouri.

Sarah Francis Pipes' father, James Preston Pipes, was a grandson of two Pipes first cousins (James Pipes and Sarah Pipes). Sarah Pipes was a daughter of John Pipes Jr. and James Pipes was a son of John's brother, Sylvanus Pipes. James and Sarah were both born in North Carolina and raised within a stone's throw of the cemetery. They married in Mercer county in 1810 and were some of the first settlers to migrate into Missouri about 1811. They are something of a legend in the Pipes family.
Posted by Bob Pipes at 9:38 AM