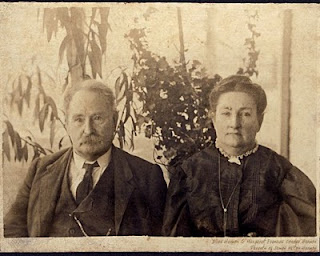 A great picture of Elias Montgomery Harmon(1844-1924) and his 3rd wife Sallie Ann Montgomery(1854-1941). This great picture comes to us from Mark Schmidt, one of Elias' descendants. I think the picture is dated about 1910. Mark had the picture attached to a family tree on Ancestry.com and has given us permission to show it here. He also has a Conder family bible with some family info in it. Elias was married first to Margaret Conder then to Clarissa Montgomery and lastly to Sallie Ann Montgomery. He was a private in Company "G" of the 10th Kentucky Infantry(Union). Elias also had a farm very close to the cemetery and it was listed in the census next door to Rice Harmon's place which is right at the entrance road to the cemetery. Elias was a son of Michael Harmon III and Marion Webster. Click the photo to enlarge.
Note: the writing on the photo says that this is Margaret Conder but if you look at the ages, this has to be Sallie Montgomery.
Posted by Bob Pipes at 8:09 PM